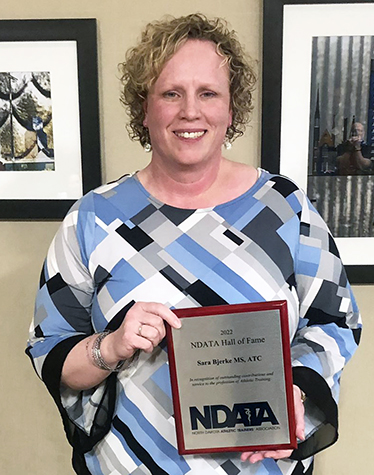 “I am humbled and honored to be inducted into the North Dakota Athletic Trainers Association Hall of Fame,” said Bjerke, a UND alumna. “I am thankful to the Association for giving me the opportunity to serve the profession and represent North Dakota at all levels. My ‘why’ for serving is and always has been giving back to the athletic training profession that has given me so much. I have enjoyed every minute of it.”

Bjerke, who was inducted into the Hall of Fame at the NDATA Clinical Symposium and State Meeting on Saturday, April 9, 2022, has been an athletic trainer (AT) for over 25 years, working with a variety of populations, including high school and college athletes. She made the jump back to university life in 2014 and has been at the University of North Dakota ever since.

Since its incorporation, the NDATA has inducted fewer than ten Hall of Fame athletic trainers. Bjerke is the third AT from UND to receive the recognition and is the first female inducted into the Hall of Fame.

In a statement, the NDATA noted that it was excited to “get to recognize a wonderful AT for her amazing accomplishments and dedication to the profession of AT in our state. Congratulations Sara Bjerke on your induction in the NDATA Hall of Fame!”

The SMHS program in athletic training is one of the oldest in the region and was the first program in the nation to be housed within a college of medicine and health sciences alongside physicians, physical and occupational therapists, physician assistants, and medical laboratory scientists. This type of arrangement is today considered best practice for athletic training programs.