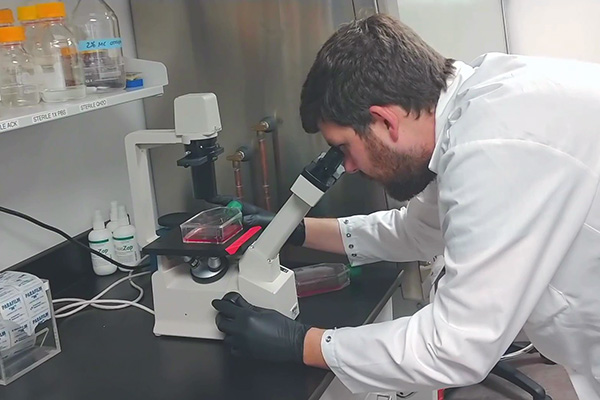 GRAND FORKS, N.D.--
A team of researchers at UND’s School of Medicine & Health Sciences might just have revolutionized the treatment of solid tumor cancers.

As reported in the prestigious Journal for Immunotherapy of Cancer, a team led by Department of Biomedical Sciences professors David S. Bradley, Ph.D., and David S. Terman, M.D., identified two new members of the “superantigen” family that, when combined with a common “helper” molecule, showed significantly higher cure rates in and long-term survival of animals with solid tumors compared to other immunotherapeutic agents now deployed clinically.

“Immunotherapy has completely revolutionized the management of the most treatment-resistant human tumors such as melanoma, lung, breast and colon cancer” said Terman of using the human immune system itself as an anti-cancer catalyst. “Here, we discovered two new superantigens that unlike others used before them kill advanced tumors in transgenic mice without attendant toxicity.”

Superantigens are a class of bacterial-based antigens that induce an “overactivation” of the body’s immune system. Specifically, superantigens trigger the white blood cells known as T-lymphocytes or T-cells that help the body generate the inflammatory response that fights infectious organisms and cancer.

“Previous superantigens deployed in clinical trials of patients with advanced cancer failed to reach their potential largely due to their excessive toxicity and the widespread presence of neutralizing antibodies in human blood that blocked the superantigens from exerting their tumor killing function,” Terman continued. “Unlike their earlier relatives, our new superantigens showed a low incidence of such disabling antibodies.”

Terman further explained that he and Bradley were able to eradicate the toxicity noted with other superantigens by combining the new superantigens with a partner molecule known as HLA-DQ8. In other words, the pair demonstrated that when combined with a molecule that helped reduce toxicity, their superantigens served as lightning rods attracting the body’s own T-cells to the tumor and destroying it in more than 80 percent of mice.

Making this result even more attractive, Bradley added, is that the anti-tumor mechanism of the superantigens appears to be long-lasting and that it also served as a “vaccine” that prevented the development of tumors and withstood subsequent challenges with live tumor cells.

“The tumor killing seemed to be an ongoing response that continued for quite some time,” he said, noting how the mice “were at least 400 days post-treatment, which is the equivalent to more than 60 human years,” without experiencing any recurrence of cancer.

The team is now on the cusp of clinical trials in humans—pending FDA approval. Trials are planned to be carried out collaboratively with UND and a team at the University of Washington in Seattle later this year. All of which is to say: within 18 months the horizon could look very different for persons with solid tumors.

“The total destruction of the tumor ten to sixteen days after starting treatment and long-term survival even after tumor rechallenge was just remarkable,” concluded Terman, who called the speed and precision of the tumor killing “striking.”

“The important point here is that the discovery of immunotherapy and its application to solid tumors has taken over now as first-line treatments for dreaded diseases such as melanoma, carcinoma of the breast, lung, and to some degree even colon and kidney cancer,” he said. “These have subsumed chemotherapy as front-line treatment. We’re very heartened by this and there’s no reason to believe this wouldn’t be a very successful treatment in humans.”