“Always try to find the sunshine in the dark cave,” said Alex (a brain injury survivor panelist who was identified by his first name) during his talk at the 2021 Mind Matters Conference held virtually in March 2021.

Sandi Gruhot agreed. During a different presentation of her own, Gruhot spoke about her stroke journey. A wife, mother, and registered nurse, Gruhot said she first lived in denial that she’d had a stroke that left her with a brain injury. Later she came to realize that the stroke was likely the second brain injury she’d sustained, the first occurring during a water-skiing accident 20 years earlier.

Tales from survivors such as Alex and Sandi proved among the most impactful of all the presentations this year, according to feedback from those attending the conference. The survivor panel, in which Alex was involved, included several men who shared how they sustained brain injuries and the struggles and triumphs they’ve experienced during their recoveries. They also discussed therapies that have been helpful, as well as challenges they still face.

Feedback from the event also suggested that more people were able to attend the conference because it was held virtually this year due to COVID-19.

“I have to say, it was my first Mind Matters Conference, and I kind of love the commute to my kitchen table, casual attire, and the Zoom was easy to access,” one attendee remarked.

And because the 2021 virtual Mind Matters Conference was so well received, NDBIN is exploring the possibility of holding future conferences both in-person and online. 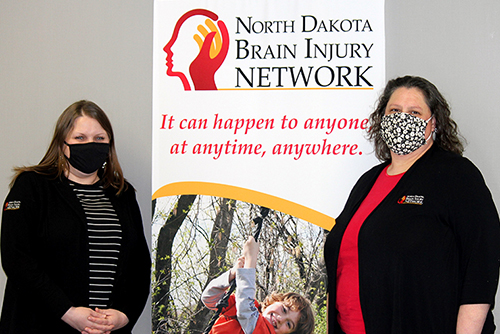 “We were happy to be able to hold it at all this year, but even more happy to see the virtual platform was well received,” said NDBIN Outreach Coordinator Carly Endres, remembering how last year’s conference was canceled due to the pandemic. “Ideally, we will offer a virtual and in-person format. We would like to be able to offer both formats and are exploring those options.”

Building on the survivors’ panels, Wendelin Hume, Ph.D., associate professor in the UND Department of Criminal Justice, discussed the balance between best-case and worst-case brain injury recovery scenarios. She talked about her own brain injury experience and offered tips from her perspective. As several other presenters also suggested, Hume said that brain injury survivors can still continue to improve years after their injuries. She asked that healthcare providers be more encouraging and supportive, listening to their patients and letting the patients help guide their own recoveries.

Along with presenters offering information on the latest brain injury research, healthcare professionals also discussed a variety of treatments available to survivors. During her keynote speech, Jena Gorden, a speech-language pathologist, talked about yoga and meditation and their benefits for brain injury survivors.

“This is probably something we are going to have to get used to, the use of technology, whether we like it or not,” she said.

Hoffman discussed the pros and cons of telerehabilitation. The pros include everything from not having to travel to being able to use objects in the clients’ own homes for therapy rather than just random items pulled from a box. Cons can include internet connectivity and insurance coverage issues for virtual appointments. Hoffman and others also showed videos of clients using teletherapy services effectively.

All in good fun

This year’s conference included some fun activities as well, such as a virtual scavenger hunt and Bingo game. And 2021 marked the first conference to recognize the Volunteer of the Year and Certified Brain Injury Specialist of the Year awards, according to NDBIN Director Rebecca Quinn. Winners of those recognitions were Sandi Gruhot and Sarah Ring, respectively.

“We wanted to establish these awards as a way of recognizing those who are vital assets and work tirelessly to improve services for individuals with brain injury in North Dakota,” Quinn said.

Such fun is vital, not only for survivors, but also for brain injury caregivers. While Alex advised fellow survivors to stay positive, Alex’s mother, who is also his caregiver, suggested that those who find themselves in her position should research brain injuries and network with others who can guide them to the help they need.

Gruhot talked about living with the fear of a second stroke happening and the realization that she had been wasting precious time worrying about a future she couldn’t control. Instead, she now chooses to live fully every day and find true purpose. She also discussed the importance of support groups and praised NDBIN for connecting survivors, offering learning opportunities through “Webinar Wednesdays,” and providing a wide range of other resources for survivors, caregivers, and healthcare professionals on its website.

“I really encourage you to check it out,” Gruhot said.