“The science put forward by this cohort is exceptionally novel and creative and is sure to push at the boundaries of what is known,” said National Institutes of Health (NIH) Director Dr. Francis Collins last year, speaking of the 2021 winners of his namesake award—the NIH Director’s Transformative Research Award—who had just been announced.

Half a nation away, a professor in Grand Forks, N.D., looked up from his computer and smiled.

At the time the release quoting Collins was coming out, Abraam Yakoub, Pharm.D., Ph.D., an assistant professor in the UND School of Medicine & Health Sciences (SMHS) Department of Biomedical Sciences, already knew that his project was one of only five projects selected by the NIH in 2021 with the potential to make the most groundbreaking discoveries on COVID-19.

But the notice still felt nice, said Yakoub, recalling a different NIH news release that called his and others’ ideas “transformative projects … that have the potential to create or overturn fundamental paradigms.” After all, most researchers don’t get that sort of press—“transformative,” “exceptionally novel”—very often.

“It was heart-warming to be recognized by Dr. Francis Collins, that our work and ideas are indeed transformative—a paradigm shift of the mainstream understanding of COVID-19,” Yakoub said, explaining how the award was part of the NIH’s High Risk High Reward program. “It was satisfying and shows that people understand how big these ideas are and that they could change the world. By the NIH’s own admission, the science we’re doing here is very powerful and revolutionary.”

‘The structure of scientific revolutions’ 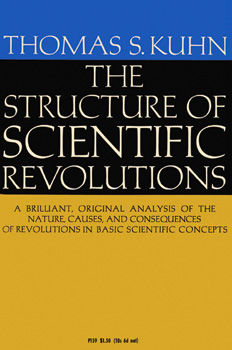 Although he was perhaps not intending it, Collins’s commentary on the projects Yakoub and his colleagues developed referenced Thomas Kuhn’s 1962 classic study in the history of science, The Structure of Scientific Revolutions. In the book, Kuhn distinguishes “normal science” (the routine and necessary basic science undertaken by researchers every day) from the less frequent “revolutionary” variety, arguing that, ultimately, new paradigms of understanding tend to be produced by the latter.

That is to say, advances in science come about less by the slow, grinding work of countless diligent researchers working in the trenches daily within a given paradigm, said Kuhn, than they do suddenly and at times dramatically.

“[N]ormal science ultimately leads only to the recognition of anomalies and to crises [in science],” the historian mused. “And these [crises] are terminated, not by deliberation and interpretation, but by a relatively sudden and unstructured event like the gestalt switch. Scientists then often speak of the ‘scales falling from the eyes’ or of the ‘lightning flash’ that ‘inundates’ a previously obscure puzzle, enabling its components to be seen in a new way that for the first time permits its solution.”

It was for this sort of “gestalt switch” that the NIH awarded Yakoub’s team a five-year, $4.5 million award to examine coronavirus using a “systems-based approach” to disease, rather than thinking of the virus as affecting the lungs only.

“Why is the virus killing millions of people?” asked Yakoub. “Is it just a lung infection or something beyond? We told the NIH we have an idea why this might be happening, and they liked the idea. This award is a testimony to our exceptionally innovative, trailblazing research program. It means we really are thinking outside the box in order to crack scientific mysteries.”

To that end, the project could lead to discovering the “black box of COVID-19,” he said.

Such bold thinking is what Yakoub—whose email signature includes the Albert Einstein quip “Only those who attempt the absurd can achieve the impossible”—hopes to make more routine in his own lab.

“By genetics and personality, I happen to be someone who is deeply keen about innovation and creativity in my work on a daily basis,” he explained, adding that it was the possibility of major breakthroughs that drove him to science in the first place. “I do believe in the power of out-of-the-box thinking, and part of my mission is to role-model that to my trainees and students. We want to inspire students to think transformatively, to overturn paradigms and not get stuck in a certain mainstream thinking [in the field], which could be wrong or incomplete. We want to model to people how to develop the transformative mind. Just like a muscle, your brain can be trained to think in a paradigm-shifting manner.”

As Kuhn noted, then, from the Copernican Revolution to germ theory to quantum physics, the history of science suggests that many of the thorniest questions in science require such transformative thinking to address satisfactorily. 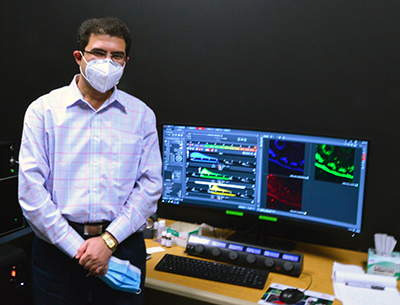 The same is true in medicine, said Yakoub.

Speaking of neurodegenerative diseases like Alzheimer’s and Parkinson’s, Yakoub added that for all the progress science has made in the past century, we’re all still a long way from a cure for these and similar conditions. As such, a new research paradigm might be in order.

This is why his team also applied for and received a second grant from the NIH’s National Institute on Aging (NIA) to study neurodegeneration in a way that could mean the end of such diseases as we know them.

“A lot of approaches to date suggest people have been trying to cure neurodegenerative disease, but these have thus far failed to cure Alzheimer’s and Parkinson’s,” he said of neurodegeneration, his original research focus. “So we’re taking a very different approach than mainstream thinking.”

Specifically, Yakoub is using the cutting-edge concepts of synthetic biology and “directed evolution” to evolve a protein with a desired therapeutic function. The researcher said that this second project will leverage the power of a virus in therapy while at the same time disable its toxic machinery.

As one peer reviewer put it, the potential significance of Yakoub’s neurodegenerative project is likewise tremendous. “This therapy has the potential to revolutionize the field,” the reviewer said, adding that “if the aims are even partially successful, the project could lead to new therapeutic avenues for neurodegeneration.”

From bench to bedside

The type of research that Yakoub’s lab pursues is known as clinical translational research (CTR) in so far as it “translates” discoveries made at the laboratory bench into novel therapeutics such as pharmaceuticals or gene therapies that will directly benefit patients in the clinical setting. The SMHS has made CTR a priority in recent years through an earlier grant supported by the NIH.

For the countless persons afflicted by not only COVID-19 but the many neurological disorders that cut so many other lives short, however, such translations can’t come soon enough.

But even though the research takes time—and revolutions are few and far between—answers are coming, concluded Yakoub. One only needs to maintain hope, faith, and courage.