From Norge to North Dakota

Norwegian Occupational Therapy doctoral student Tess Pettersen reconnects with two of her former instructors 4,000 miles and five years from when they first met.

Dropping her work bag near the back door of our Grand Forks home, Robin David, my wife of 20 years, had some interesting news to share.

“I visited an occupational therapy class in your building today,” said Robin, who directs the Grand Forks Public School District’s Mentor Center, a tutoring/wellness project for middle and high school students that shares a building with the UND School of Medicine & Health Sciences (SMHS) Family Medicine Residency on UND’s campus. “Tess was in the class.”

This is how Therese “Tess” Pettersen, a 25-year-old Norwegian in the second year of her Occupational Therapy Doctorate (OTD) program at UND, re-entered our lives.

I should back up.

In 2017, Robin and I taught separate courses, in English, to a combined cohort of Norwegian and American students at the American College of Norway (ACN) in Moss, Norway. The small college, housed in an historic building at the bottom of a hill just off the rushing Mosseelva waterway, partners with a handful of American universities, including UND, in an effort to expose first-year Norwegian undergraduates to American-style higher education.

Functioning as first-year experience for Norwegians and a study abroad semester for Americans, ACN helps the majority of its Norwegian students transfer to schools in the United States to complete their degrees. After taking a handful of courses from American professors in 2017, Tess did just that, arriving in the U.S. later that year to pursue first an undergraduate and then a graduate degree at UND.

And although neither Robin nor I had heard from any of our former ACN students for some time, here was Tess, five years later, helping produce a needs assessment for the Mentor Center on behalf of an award-winning OT department that it’s my job to help publicize for the SMHS.

With the help of Department of Occupational Therapy faculty Wanda Lauer and Jane Loscheider I decided to reach out to Tess, if for no other reason than to catch up. In true Norwegian fashion, she was more than happy to pass some time with a familiar face in a still sometimes-foreign land.

Shaking hands in the OT program’s therapy laboratory in the SMHS building—a gorgeous classroom equipped with a fully-furnished and functional living space that helps train therapists to return clients to the tasks of daily living—Tess and I sat down this past February to chat OT, health systems, and the different COVID outcomes across different nations. 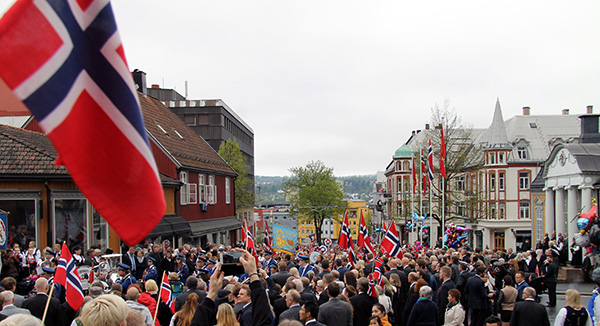 After a smattering of small talk, the blonde student from the land of trolls and snow broke the ice.

“The reason I remember you so well is because in that class, over the summer, you had us write a paper,” she smiled. “I don’t even know what the paper was about, but you had us submit a draft before the final grade.”

As a 19-year-old, Tess recalled, she had written “gonna” instead of “going to” in the paper in question, a colloquialism I apparently asked her to correct.

“Being a Norwegian and having an American professor, you really want your English to be perfect, right?” she laughed. “And I remember you wrote a little comment and said ‘What is this? Fix it.’ To this day I have never used that word in any school paper. I don’t even use it if I’m texting, because I hear your voice in the back of my head.”

This diligence, attention to detail, and willingness to correct mistakes is what makes Tess a natural occupational therapist. Back when Robin and I taught and advised undergrads for UND’s interdisciplinary Honors Program, we came to recognize very quickly that not only were pre-OT students the kindest and most gracious cohort, quite literally; they were also typically the most pragmatic, organized, competent, and helpful people on the planet.

“I feel like you really get to know a person [in OT], you get to know who they used to be before they received a diagnosis or before an injury or accident,” she continued, explaining her attraction to OT and noting that she initially fancied herself a physical therapist. “You get to meet their families, work with their entire support system, and you’re able to become a part of that family for sure. I just felt it was a better fit.”

Like many of her compatriots, Tess had been to the U.S. before, with her family. Until 2017, though, she had yet to set foot in North Dakota. And while you might imagine that a Norwegian would be unfazed by the state’s bitter cold, she admitted that her first winter in the Dakotas was more of a challenge than she had anticipated.

“In Norway, we have mountains, trees, you know—something to protect you from the elements,” she said with a gesture toward the window. “Here, there’s nothing like that. Just wind. I had no idea that the winters were going to be this bad. And I remember at the time I told my roommate at ACN, who was from this area, that I was excited because ‘I’ll be there with you in college. We’ll go hiking!’ And she just laughed.”

It’s extremes notwithstanding, it’s the North Country’s bitter cold that, as Bob Dylan put it in Martin Scorsese’s film No Direction Home, “equalizes everyone” at the same time as it generates a “we’re-all-in-this-together” sense of community.

This is, in part, why Pettersen was at Robin’s Mentor Center.

Embedded within the OTD curriculum is a series of courses that ask students to develop independent service- and experiential-learning projects with and for other educational, nonprofit, or community-based institutions in the area. Tess’s specific OT cohort is helping the Mentor Center with program development and assessing Grand Forks students’ physical and emotional health needs.

“We met with Robin, who is our guide through this,” Tess explained. “We’re working with her, targeting what the Mentor Center needs. They already have life skills programs, cooking classes, and guest speakers. But if one of those programs needs further development, that’s something we can look at from an OT perspective.”

As Tess put it, such courses, emerging out of the state’s community-oriented culture, are what helped UND’s occupational therapy program stand out from others and are part of why she ended up in Grand Forks.

“You really get a lot of hands-on experience, which is great, and a feel for what it’s like to help people and help agencies and different populations,” she said.

Robin agreed, describing how she considers such partnerships invaluable.

“As a big fan of the occupational therapy profession, I was enthusiastic about partnering with the SMHS program,” she noted. “Having seen the impact of OT first-hand with all ages, I was eager to enhance offerings for our Mentor Center students. I certainly couldn’t have imagined that the partnership would also allow me to connect with someone I met across the ocean years before.”

Even more, said Tess, studying at UND has given her an education in American healthcare—and how different it is from the system she’s used to.

“We have specific classes where we talk about the different types of health insurance and spend a lot of time trying to differentiate between plans,” she added. “Medicare, Medicaid. We get a general overview and introduction to all that in-class, and it’s something we learn more about when we go on our fieldwork—the different types of insurance.”

At this point I shared with Tess my story of the night in 2017 when I took my son, who was suffering an asthma attack, to a spartan Norwegian emergency room. After consulting with the calm, English-speaking physician, getting my son an aerosolized dose of albuterol, and being given some shockingly inexpensive prescription medication, we went to the facility’s desk, as directed, to check out.

Through a series of apologies, the receptionist somewhat sheepishly explained that because we were not Norwegian citizens, and thus not enrolled in the country’s national health plan, we’d have to pay for the visit.

Shrugging and handing over my credit card, I soon saw a read-out on the payment terminal: $75 USD, including a one-month supply of prescription asthma medication. Not much more than a co-pay back in the U.S., and no follow-up bill to come.

All for an emergency patient—a non-citizen—with no health insurance.

Wincing a bit at my anecdote, Tess acknowledged that such factors influence her thinking on where she might begin a professional life after she graduates in 2023.

“It’s really hard to witness people [in the U.S.] who need services from OT and PT—or just medical care in general—but can’t afford it or do not have insurance that covers it. You hear stories, or other students’ experiences on fieldwork. You’ll hear about those who only have three visits with OT—that’s all their insurance covers—when in reality they should see an OT for 10 sessions.

“That would never happen in Norway.”

Such differences, Tess suggested, account at least in part for the vastly different pandemic outcomes in the U.S. and Norway. As of this writing, the World Health Organization reports some 950,000 COVID-related deaths in the U.S., and more than 79 million confirmed cases since the pandemic began. In Norway, the number of COVID deaths is around 2,000. Accordingly, the Johns Hopkins University Coronavirus Research Center gives the U.S. a deaths/100k population ratio of 285.15—ten times Norway’s 28.96 ratio.

“So, normally, as a country, we want to protect everyone,” Tess quipped as if the concept were self-evident. “We don’t mind paying for our neighbor. And so we closed down our country pretty quickly. We were really strict about quarantines, isolation, testing, all these things. The malls closed, restaurants, everything. We just recently started to open back up.”

Didn’t that hurt the economy, I wondered. How did folks pay rent?

“People were basically furloughed, and I think for the first 30 days of that furlough they still received their salaries,” she explained. “And then after a certain amount of time, they would receive 60% of [their salaries], so they were still getting paid although they weren’t working. And Norway paid that bill. As a society. We didn’t like having to shut everything down–some people lost their jobs or lost their house because they couldn’t pay their mortgage. But at the same time, we saw how many lives we were saving.”

In the end, then, Tess acknowledges that it’s hard to dissociate having grown up in a nation with this mindset–caring for others–from her own desire to enter a profession designed to help others in physical, emotional, and social ways.

“You want to provide care to everyone. You want to help everyone that needs help, right? One person can’t do that. But together we can.”