Two Peas in a Pod

“When we did find out there was going to be a pod with all our teams, one of the first things I thought of was, ‘Can I get my two senior students there?’” recalled Department of Sports Medicine instructor and athletic trainer for the UND men’s hockey team Mark Poolman. “I was pretty excited when I learned that they could come down there and work with the guys. They helped immensely.”

A twenty-year veteran trainer with UND’s blade runners, Poolman was describing his and his senior students’ time in the so-called National Collegiate Hockey Conference (NCHC) “pod,” which in the final two months of 2020 housed eight teams’ worth of full-time college students as they juggled academics with ice time, playing 38 games in 21 days in Omaha, Neb.

“We heard about the bubble maybe around the end of September,” Wheeler said. “We were excited, so we started making our schedule changes and started prepping more in the weight room to get guys ready. Then it just came fast.”

Dub agreed: as great and productive as it was, the entire experience was something of a blur.

“We all had to do a symptom check every day and show the staff as we walked in that we were good to go for the day,” she said of her introduction to the world of Division I collegiate hockey during a global pandemic. “Obviously everyone was in masks at all times, except the players when they were on the ice.”

As the SARS-CoV-2 virus spread over the summer – and peaked in the fall – athletic directors and presidents at all universities were forced to make difficult decisions about athletics in the 2020-21 academic year. Players, coaches, students, and fans all wanted sports to continue unabated, of course, in some cases because their graduation and/or accreditation depended on it. And administrators and health officials wanted the safest environment possible for everyone. 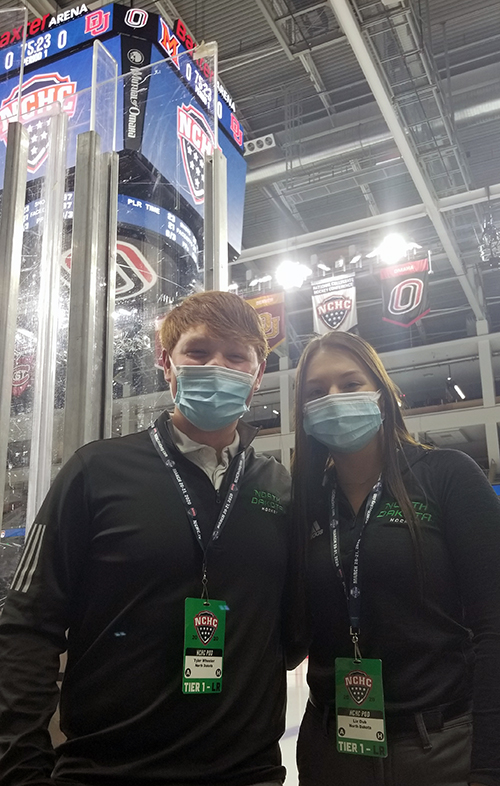 Where Division I hockey was concerned, then, officials decided that quarantining teams together in a single, centrally-located city with capacity to host such an event for a few weeks was a reasonable solution.

And the reason he needed his seniors in Omaha for three weeks straight, said Poolman, was that the early months of the pandemic in 2020 curtailed his upperclassmen’s ability to get hands-on experience with student-athletes last spring. Having missed out on a lot of “clinical” training, the soon-to-be graduates desperately needed a real-world crash course.

“With no games, they were missing out on their clinical experiences, game experiences,” Poolman said. “That’s the benefit of us playing sports this fall and winter despite COVID – that practical experience that all these students get. Because if we’re not playing, they’re not getting the experience of seeing injuries they need to know how to evaluate, treat, and rehab.”

Wheeler agreed, adding that a hands-on program needs its hands-on component to function.

“When we’re not in our clinical setting and don’t have someone ‘live’ to work on – no real injuries – it’s hard to get that learning experience,” said the Wadena, Minn., native. “The pod allowed us to get that experience back. It was so fast-moving that if you didn’t hop on the train you were left behind. So, it forced us into that next level of thinking and adaptability and was overall a really great experience.”

Or as Dub put it, although she was worried about falling behind with graduation and a national certification exam coming up, the pod helped ease her anxiety.

“All my class was nervous coming into this year, hoping we could make up for the time we lost,” she said. “Now, we’ve all grown to be much more adaptable to change. We can all go on the fly now, which will benefit us in this profession, since there is a lot of that.”

“We’re with the team all year, so we’d had an opportunity to work with them before the pod, and now were still with them,” explained Manvel, N.D., native Dub, describing how she and Wheeler bused down with the Penrose Cup-winning team and were “quarantined” with them in the Aloft Hotel during the course of the extended hockey junket. “We’d met the guys and were working with them beforehand, so those relationships had been established. We went to the rink for their practices and skates, and converted an extra hotel room into our team’s training room for after practice and games, since there wasn’t space at the rink.”

In terms of actual patient care, Wheeler and Dub saw a lot of minor injuries that were the result of primarily overuse and/or fatigue.

“By the end, people were just tired,” said Wheeler. “We saw a lot of injuries to lower backs, hips, tired legs. We were pretty lucky we didn’t have anything super bad. There were three shoulder separations in one week—kind of a fluke deal. A lot of overuse issues.”

And a lot of sore bodies, added Dub: “That last week, I was ready to go home. That was the consensus with the players too. Their bodies were starting to break down—they’d played a lot and were ready to be done.”

When not working with the players, the trainers hung out in the hotel with them—studying, attending virtual classes, and otherwise taking advantage of what little down time they had.

“The hotel was pretty much just our team,” Dub said. “Once we were there and had our negative [COVID] test results, we could hang out with each other. We weren’t just stuck in our rooms with nothing to do. I don’t remember a lot of down time between practices and treatments.”

Neither student, they said, would trade the experience for the world.

“It was nice to get away, and neat in that we could still go to school full time online,” Wheeler smiled. “It did get long by the end—you were missing your own bed after being in that hotel room that long, but it was a good time.”