Randy Pederson no longer sets his alarm clock. He no longer enters the Tioga Medical Center each day, as he had for the past 40 years. And he’s fine with that. After a long tenure as the Chief Executive Officer (CEO), Randy Pederson has retired.

Tioga Medical Center (TMC) in Tioga, N.D., has had two CEOs in the past 48 years. Pederson was that executive for nearly 16 of those 48 years, and his predecessor held the title for 32 years before that. This is an astounding track record considering the average tenure of a healthcare CEO is about five years, according to the American College of Healthcare Executives.

Pederson’s long career with TMC started in 1980, when he took a job out of college as the facility’s office manager. From there, he quickly moved into the role of Chief Financial Officer (CFO), then added vice president and assistant administrator titles to his duties. In 2005, Pederson was tapped for the CEO position, a title he held until late last year.

“People told me that I would know when it was time to retire, and they were right,” he smiled.

His duties at the hospital alone hardly encompassed the active community leader that Pederson was, and still is.

A long-serving member of the Tioga Fire and Ambulance team, Pederson is used to taking emergency calls at all hours of the day or night. He is now taking an even more active role in the organization since retirement, setting up an office at the fire department and managing the books there.

“It was pretty common for me to show up in the ambulance bay with a patient during the work week,” Pederson said of his role as a firefighter.

Additionally, Pederson’s voice can be heard over the radio during broadcasts of local sporting events, where he calls play-by-play for high school games.

Pederson’s long-time goal had been to make it to 40 years of service at TMC. But just as his 40th work anniversary rolled around, so did COVID-19, which was hard on smaller healthcare facilities like Tioga’s. Both of his wife’s parents passed away from COVID-19 in the spring, and a positive COVID-19 test for both Pederson and his wife this past summer gave him pause.

“It makes you think a little bit,” he said.

As a three-time cancer survivor, Pederson has learned never to take his health for granted. So, during his two weeks home on quarantine in July, he made plans to wrap up his career by the end of 2020. 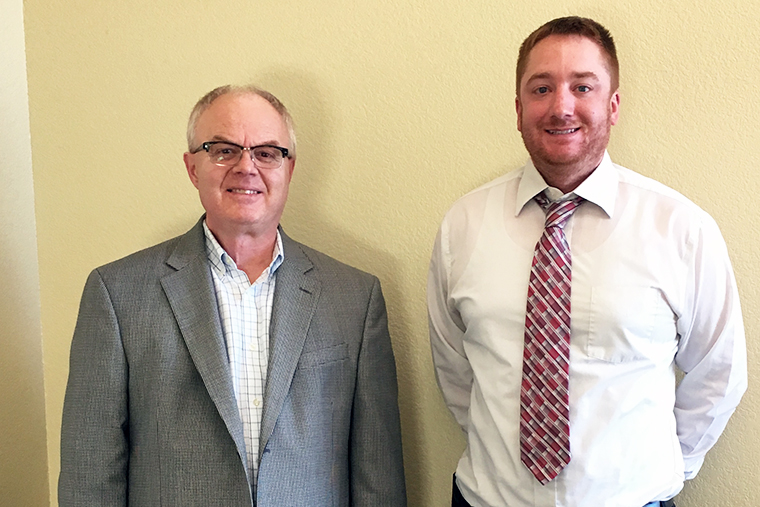 His decision was made easier knowing that he is leaving TMC in the capable hands of Ryan Mickelsen, a 10-year employee of TMC who joined the organization as a financial services director. Hailing from Kenmare, N.D., Mickelsen came to the organization with more than two years of healthcare experience. With Pederson as a mentor, Mickelsen quickly earned his rank as CFO, and then Chief Operations Officer before taking over as CEO in November 2020.

Pederson has left his mark on TMC and the Tioga community. Only recently, TMC updated and re-opened their operating room to visiting physicians and surgeons, which has helped keep care close to home, and revenue coming into the organization. And in 2015, TMC hired Dr. Robert Rotering, who has worked side-by-side with both Pederson and Mickelson to put TMC “on the map” as a place for quality healthcare services, increased health profession education and training, and improved overall wellness for patients in the community.

Looking forward, Mickelsen plans to build on the foundation that Pederson set by completing a Wellness and Education Center within the clinic. The space will be multi-purpose, and double for use as a Williston State College School of Nursing satellite location, helping train as many as 16 nursing students per year on-site. The space will also be used for traveling physicians who do outreach clinics in Tioga, as well as for community education, community conferencing, and group exercise.

The mission statement for TMC is, “Great staff that are making a difference in the lives of people every day,” which is something that Pederson, and now Mickelsen, strive to emulate both at the health center, and in the community.

“Randy was, and is, very involved in the community. While he never made any of his employees volunteer, most did because he encouraged it and accommodated schedules to allow it,” Mickelsen said, noting that over half of the volunteer fire and ambulance team are made up of TMC staff, himself included. “Randy’s leadership style and mentality centered on the fact that we’re not just co-workers – we’re family. We’re family taking care of community members, who are family, too.”

As he wraps up his long career, Pederson has no regrets.

“Healthcare is a noble profession and a calling. I feel fortunate that I always felt satisfied and fulfilled by my work. I never felt I needed to go anywhere else. Not every day was great, but there were a lot more good days than bad,” Pederson said.

Something we all hope to say the day we get to turn our own alarms off – for good.