It is by now something of a cliché to suggest that humans have not one, but two brains: one in the head and one in the gut.

And now science is finally providing hard evidence for the notion of “gut feeling,” going so far as to suggest that the gut-brain axis is a very real thing. So real, in fact, that intestinal disease increasingly seems to play a role in neurodegenerative disorders like Alzheimer’s.

That, at least, is the hypothesis that Colin Combs, chair of the Department of Biomedical Sciences in UND’s School of Medicine & Health Sciences (SMHS), and his team are working under these days. 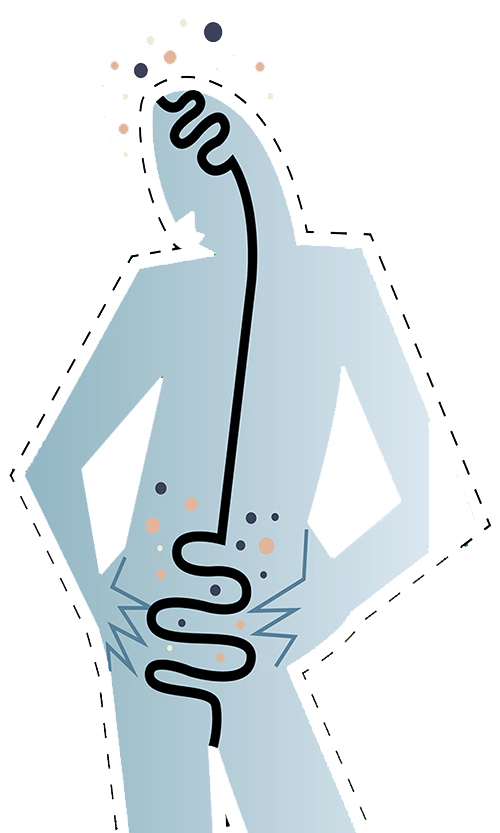 “In past few years there’s been an understanding that bacterial changes in the intestine might be influencing the severity or progression of Alzheimer’s,” said Combs, a Chester Fritz Distinguished Professor, explaining that the intestinal microbiome might even serve as a biomarker for brain health. “One of the things we’ve found is that some bacterial changes [in the intestine] are indicative of the disease state, and manipulating those bacteria, say with probiotics or antibiotics, has effects on the ways disease presents in the brain.”

According to Combs, recent animal models suggest that inducing so-called “leaky gut” and other inflammatory diseases of the bowel like Crohn’s, ulcerative colitis, or irritable bowel syndrome (IBS) affects the severity and progression of Alzheimer’s, and possibly other neurodegenerative disorders.

This is why his lab is looking to see if targeting the gut with things like probiotics, anti-inflammatory medications, and other therapeutics might not only reduce Alzheimer’s symptoms in animals with the condition, but possibly help prevent it in others.

Meaning Alzheimer’s is likely much more systemic in nature than was previously thought.

So compelling is this hypothesis that in September the National Institutes of Health (NIH) awarded Combs a 4-year, $1.4 million grant to explore all of this in more detail. The project, entitled “Communicating Intestinal Inflammation to the Brain in Alzheimer’s Disease,” focuses on improving researchers’ understanding of how the brain communicates with the gastrointestinal tract via the gut-brain axis.

Completion of the study will help verify the role of gut inflammation in Alzheimer’s progression and suggest clinically available therapeutic options as possible treatments for Alzheimer’s. In other words, agents involved in the treatment of in gut inflammation might be repurposed to combat the inflammatory component of Alzheimer’s without the need for crossing the blood brain barrier, as most current Alzheimer’s therapies do.

“Our preliminary data supports that [premise],” said Combs. “Addressing immune problems at the level of the intestine seems to communicate to the brain, changing some immune issues in the brain as well. So, if we can manipulate the disease by using therapies to fix the gut, maybe we can slow down the rate of progression or severity of Alzheimer’s.”

The SMHS is coming off its best research year ever in terms of dollars awarded. Researchers based in the school pulled in a record $30.8 million in 2019-20 for projects focused not only on neurodegenerative conditions like Alzheimer’s, but cancer, Indigenous health, and various infectious diseases, including COVID-19.

Speaking of cancer, Combs added that there is an interesting link between Alzheimer’s and cancer.

“Cancer is actually a negative risk factor for Alzheimer’s,” he continued. “So, for whatever reason, if you have had any kind of cancer, it seems that you’re more ‘protected’ from Alzheimer’s. We don’t know exactly what that means yet, but it’s based upon the human epidemiology.”

For example, Alzheimer’s mostly affects women, said Combs, adding that mouse data on cancer suggests that although females often develop a more dramatic form of Alzheimer’s, they tend not to get colon cancer. But males, who tend to have a less severe Alzheimer’s, get more aggressive colon cancers.

“This tells you, again, that there’s something profound about the way the gut influences the brain, and inflammation in the colon specifically,” concluded Combs.

And that’s not just a gut feeling.