Putting the ability in disability

Dan Snobl (BSPT ’70), one of the first graduates of UND’s physical therapy program, reflects on a career of helping those with disabilities reach their potential.

From a certain point of view, the world has former Minnesota Viking Dave Osborn to thank for Dan Snobl’s physical therapy career.

Recruited by UND both to play football and wrestle, Snobl (BSPT ’70) says that at football practice one fall afternoon in 1964 he zeroed in on the former UND running back.

“I fractured my wrist in three places trying to tackle [Osborn],” laughs the Mahnomen, Minn., native from his home in Marshall, Minn.

But because his post-tackle x-ray was negative, Snobl goes on, he simply wrapped the wrist and “kept playing my freshman year.” Putting off the follow-up x-ray his physician recommended, Snobl began wrestling for UND that same academic year (eventually competing three seasons on a bum wrist).

When he showed up at UND’s Memorial Stadium the next spring for football drills, he bumped into the team physician again.

“I came in and he asked, ‘what’d that second x-ray ever show about your wrist?’” Snobl explains. “So, I went and got that done finally and it was still fractured in three places. I gave up football then and started concentrating on academics and wrestling.”

Quite a way to find a career.

Although he had been interested in education, the farmer’s son found that his experience as a student athlete pushed him toward health care. He had considered being a physician. But a meeting with Bud Wessman, who was at the time just getting a new physical therapy program off the ground at UND, sold him on the young profession.

Before he knew it, Snobl found himself, by 1967, in UND’s first ever physical therapy class—a cohort of nine students—and graduating in 1970. 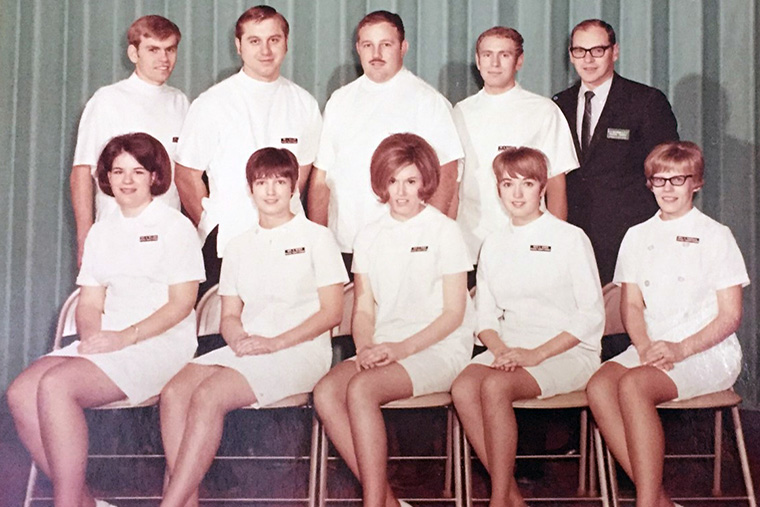 “I always remember we had a one-classroom area then—for every class,” Snobl continues, again with a laugh. “So if we got bored we’d switch the desks around and look at a different wall. Bud kept our interest level at such a peak it that was great to go to school. Learning was easy there—you just wanted to be there with him.”

Practicing in Fergus Falls, Minn., immediately after graduation, Snobl explained that he ended up working with a paraplegic who had just returned to northern Minnesota from Southwest Minnesota State University (SMSU) in Marshall. The young man related to Snobl his experience at SMSU, a new institution in the region that was designed to be “barrier-free” for wheelchairs and other students needing physical accommodations decades before the Americans with Disabilities Act (ADA) came into being.

The man’s story and determination struck such a chord with the new therapist that Snobl interviewed for a job at SMSU, where he was soon practicing.

He continued to do so for 37 years, eventually putting all of his professional energies into disability care and helping younger people with disabilities “transition” to an independent lifestyle.

As Snobl puts it, back in the late-sixties the disability rights movement was just getting underway, particularly as people were being removed from long-term care facilities and other state institutions and into homes and communities. In the absence of something like the ADA, those former individuals began to take control of their situations and demand independence and reasonable accommodations, particularly in public spaces.

“We had the good fortune that our [SMSU] president was very visionary, and the community of Marshall also opened their arms to people with disabilities,” Snobl says, explaining that those with disabilities were tired of being told “no” by society.

“That was our role [as PTs]—to ask ‘Why are we saying no and is there another way we can look at these issues and figure out how to get things done?’”

Soon, Snobl’s university counted as many as 200 students with disabilities, many utilizing wheelchairs, in its student body.

Beginning to specialize in disability therapy and service, Snobl, by now the director of Physical Medicine at SMSU, put pen to paper in an effort to document best practices in personal care attendance and transitioning.

“When I was going to retire, the students said that I had too much information in my head and they weren’t going to let me walk out of there with it and wanted to get it written down,” says Snobl in reference to the latter manual Transitioning: Youth with Disabilities. “So we sat down and put a manual together that dealt with young people with disabilities who were transitioning into higher ed and/or an inclusive lifestyle in general.”

From applying to college and dorm living, to assistive technology, financial aid, and disability law, the nearly 100-page manual covers most everything a young adult living with a disability might need to move out of their parents’ home and into college life.

“We made it very user friendly for students and parents, starting at seventh grade,” Snobl says. “Our effort was to put these students in charge of managing their [individual education plan] and advocating for themselves. It was a very powerful tool.” 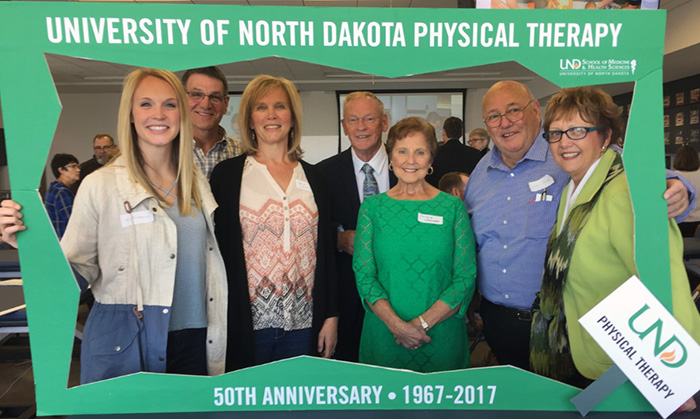 Having made a transition of his own recently— retirement—Snobl has slowed down, but only a little. Living still in the Tracy-Marshall area with Mary, his spouse of 50 years, Snobl did make the journey back to Grand Forks for the UND Department of Physical Therapy’s 50th anniversary in 2017.

Although he was the only member of his class to make the milestone event, Snobl feels that the trip was worth it, if for no other reason than to catch up with Wessman and take in the new UND School of Medicine & Health Sciences building.

“The other thing I was impressed with was they were bringing the med students, nursing students, therapists, and social workers, together,” he said of the School’s interprofessional healthcare course. “All the collaboration going on now in order not to create silos for any discipline is good. I think in health care especially, the way it’s moving, there has to be that communication that goes back and forth to make sure the consumer is being heard.”

Individuals and educational institutions interested in receiving copies of Transitioning: Youth with Disabilities at no cost can contact the Southwest Center for Independent Living at swcil@swcil.com or 507.532.2221.