Locking down peace of mind

As a first-year UND med student in 1994, Jon Bradbury (MD ’98) knew he wasn’t supposed to be working. Unfortunately, his bank account at the time was less-than-overflowing. 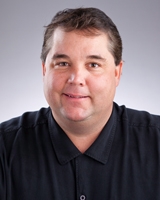 “I didn’t qualify for any grants or anything like that, and I did have [student] loans,” said the family medicine/urgent care physician from his home in Grand Forks. “So, I was bartending while I was in med school, which is definitely frowned upon.”

Saying that he was “blessed to have my family pay for my undergraduate education,” Bradbury (right) was on his own for medical school and simply needed the income, even though he knew he was supposed to dedicating 110 percent of his time to medicine.

“The bottom line was that I needed that job, and the extra money helped.”

The new School of Medicine & Health Sciences building in Grand Forks includes eight student-only Learning Community spaces where students of all disciplines study, collaborate, eat, practice clinical examinations, and even sleep at times (COVID-permitting). Each of these spaces include nearly 100 lockers where students can store their personal effects.

Earlier this year, the School and UND Alumni Association & Foundation began approaching alumni, asking if they might be interested in sponsoring students through a gift to the Dean’s Scholarship Endowment, accomplished through a locker “purchase.” Any dollars given to this endowment go to scholarships for students of all SMHS majors.

“If there are people like me out there who can get even a modest scholarship to take a little pressure off them financially, that’s important,” Jon explained, adding that he thinks of the gift as part of a broader retention strategy for the state. “Sometimes giving people just small scholarships helps. It’s not necessarily always about the dollar amount—it’s that feeling of being given a reward, of being appreciated, and that’s the kind of thing that might keep people in the area.”

Noting also that it can be difficult for some programs to recruit out-of-state persons to get a professional degree in North Dakota, Bradbury said that such giving programs are how North Dakota can provide for its own healthcare workforce now and in the future.

“You typically don’t move from North Carolina to practice medicine in Fargo or Grand Forks or Bismarck,” he added. “So, we need to keep our talent here. And if we can do that by offering scholarships and keeping our med students happy, then I think we should do that.”

Aside from providing financial assistance to students who may be in the situation that Jon was once in himself, donors to the endowment can have one of the SMHS learning community lockers named for either themselves or someone else—in memoriam or in honor of a family member who is either attending or graduated from the School.

The Locker Campaign also represents the School’s effort to offer a more modest option for anyone interested in giving to the School. For $5,000, donors get a plaque posted to one of the nearly 800 learning community lockers.

It was this price point that sealed the deal for the Bradburys.

“[The $5,000 level] was really attractive for us, and will be especially so for newer physicians or medical professionals,” Jon continued. “The reality is we’re not at that point where we can give a major gift. But to do a couple of smaller donations—that’s a great place for us to start, and it’s a great place for anybody that wants to start to give a little bit back to start.”

Plus, said Bradbury, the lockers themselves are a huge step up from what he saw as a medical student 25 years ago.

Remembering how his first year of medical school took place in the since-demolished Old Science building on UND’s campus, Bradbury noted that the move to the former St. Michael’s hospital (now known as Columbia Hall) on North Columbia Road in the late- 1990s felt momentous.

“When I started, at Old Science, boy, I tell you, if they had lockers, we didn’t know where they were,” he laughed. “And then we moved into Columbia Hall. That was like the Taj Mahal to us.”

But even the old hospital-turned-medical college lacked functional storage space for students, meaning students still had to lug around their coats, books, everything.

“We did have little lockers for anatomy lab, which we could hang our anatomy clothes in. But then those clothes stunk like formaldehyde, so we never put anything in there,” Jon mused. “I would say that we pretty much just carried all our stuff with us.”

Thanks to the Bradburys and countless other donors to the SMHS, though, such lugging is a challenge today’s health profession students will never know.

by Brian James Schill
Jenn Lukens contributed to this story