'I know that voice'

Jacque Gray, Ph.D., remembers her post-doc interview with the University of Oklahoma Health Sciences Center like it was yesterday. Thunderstorms in the Midwest delayed her flight out of Minneapolis, but eventually she landed safely late at night in St. Louis, where she was to catch the last leg of her flight. But when gate personnel started disappearing and the lights dimmed, Gray knew she wasn’t going to make the interview.

“They had booked me on TWA, and TWA ceased to exist at midnight that night,” Gray explained. 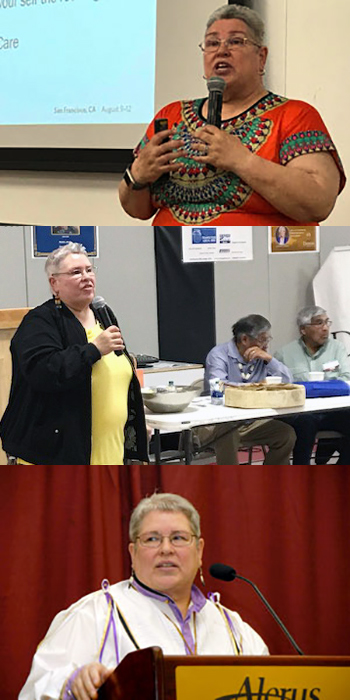 Though she was able to join the group for the interview later that day, Gray didn’t get the post-doc. But Oklahoma’s loss was the University of North Dakota’s gain when she was hired at the Center for Rural Health (CRH) at the School of Medicine & Health Sciences in 2004. She currently serves as a research associate professor for the Department of Population Health and the associate director of CRH for Indigenous Programs.

Since that fateful weather day more than 16 years ago, Gray has made a career out of helping bring health resources to those who need them most—such as those in rural areas— whatever the weather.

One of Gray’s first trips came shortly after she started at CRH and was just a small taste of what travel would be like for her during her career. She presented on the psychological effects of trauma at the 2005 Dakota Conference on Rural and Public Health in Bismarck, N.D.

“I had no money to travel on, so I had to drive to Bismarck, present, and drive back all in one day by myself,” she said.

If you travel from the Midwest as much as Gray does, you’re going to run into weather issues. Among the most memorable such trips for Gray involved a visit to Anchorage, Ak., in April 2018.

Gray (right) traveled to Alaska for a statewide training where she’d teach participants about elder abuse. The weather that week was beautiful—a solid 25 degrees warmer each day than it was in Grand Forks. But the flights home wouldn’t be as nice. Once Gray reached Minneapolis, the airport closed because of a blizzard.

“We were stranded there for two days,” she said. Gray ended up changing her flight from Grand Forks to Sioux Falls, S.D., where she was slated to speak at the Collaborative Research Center for American Indian Health Summit.

Gray’s message hasn’t been confined to just the 50 states. Keri Lawson-TeAho, a colleague from the Society of Indian Psychologists, invited Gray to speak at an Indigenous suicide prevention conference in New Zealand in 2014. More than 700 people attended, including the then-prime minister of New Zealand.

Gray spent a month interacting with faculty and students at the Center for Maori Health at the medical school in Wellington. She talked with students about the cultural aspects of treating patients and learned about Maori culture. She also presented on suicide prevention and student development.

“The second time was very different,” she said of her month-long trip to New Zealand in 2015. “I actually flew into Auckland with their World Cup-winning soccer team. So here were all these people at the gate to welcome them, and I come out in the midst of all this to find a person I did not know who was taking me to the house I was going to stay at that night [with people] I also did not know.”

As the principle investigator and director of the National Indigenous Elder Justice Initiative (NIEJI), Gray has traveled to remote areas across the U.S. to share her expertise as well. “It’s important to see the situation to know what will work or not work for the people in their locations,” she said.

NIEJI is a U.S. Department of Health and Human Services-funded project dedicated to addressing the lack of culturally appropriate information and community education materials on elder abuse, neglect, and exploitation in Indian Country.

While presenting on elder abuse prevention in Fairbanks, Ak., Gray was asked to bring her presentation to Nulato, Ak., for a 2019 conference there. Another person attending the Fairbanks conference said she had a house in Nulato, and Gray could stay with her. Knowing the community was comprised of no more than 400 people and didn’t have a hotel, Gray agreed.

“As it turns out, her daughter was in the hospital, so she was there with her [at the time of the Nulato conference],” Gray said. “She arranged for a friend of hers to take the keys and open the house up.”

Although Gray thought she was set, getting to Nulato was going to be tricky. The 700 people the conference attracted traveled by boat or small planes. Gray opted for the latter.

A small bus met the plane when it landed and took the passengers to the school where the conference was to be held. Gray asked about the woman who was supposed to meet her there with the house keys, and the school’s administrator said he would look into it. He discovered this woman was still in Fairbanks and hadn’t been able to get a flight to Nulato yet, but she had given the house keys to the administrator’s brother.

“After doing some more checking, the administrator came back and said, ‘We have some good news and some bad news. The good news is I know where the keys are. The bad news is my brother has them. They’re in his pocket. He’s in Las Vegas.’ He had gone on vacation and forgot he had the keys in his pocket,” Gray said.

The school was set up as a makeshift hotel for the conference. People slept on classroom floors in sleeping bags they had brought with them. Of course, Gray hadn’t prepared for these accommodations.

“They got people in the community to come up with a sleeping bag and a cot for me,” she said.

Gray spent a week in Nulato with little connection to the outside world. The only internet was on a cycle from 5 p.m. to 9 p.m. so students could do their homework. “It took all evening to send a couple of pictures because the bandwidth was all taken up,” Gray recalled. “It gave me a new appreciation for some of the struggles in the villages.”

The classrooms were all down one hallway. In the middle of the school, food and coffee were served. It was during one of these meals that Gray realized she was something of a celebrity in local circles.

“I was standing in line for a meal one of the days and was talking to the people around me, and this woman standing in front of me turned around and said, ‘I know that voice.’ She says, ‘Who are you? Are you someone famous? I know your voice,’” Gray said.

Gray said reactions like that make difficult journeys worth it.