Human, all too human

North Dakota’s Professional Health Program reaches out to medical providers and students in an effort to care for those who take care of us.

“We’re seeing a lot more mental illness and substance use disorders, and physicians are not immune from any of that,” said Dr. Melissa Henke, explaining why she accepted the role of Medical Director for the North Dakota Professional Health Program (NDPHP) in 2018. “[Doctors] suffer from mental illness at the same rate as the general population. We’re just better at covering it up and making excuses for ourselves.”

Physicians are only human, too, after all.

In fact, given the intense stress of healthcare work, mental illness and substance use disorders impair providers more than any other health condition, said Henke, a psychiatrist based in Bismarck, N.D. “And we don’t want that to happen.”

The NDPHP is a statewide service that helps connect physicians, physician assistants, and medical students to counseling, support, and treatment for mental health and substance use disorders. The organization also offers monitoring for enrolled providers.

Such services were initially provided by the North Dakota Board of Medicine (NDBM). In 2014, the NDPHP was created by the North Dakota Century Code (Chapter 43-17.1) as an independent nonprofit organization tasked with managing this work. The rationale for the change was that allowing the NDBM to manage a program for providers in need could either create a conflict of interest for Board members or discourage providers from seeking help if the support program in question was managed by providers’ own licensing agency. 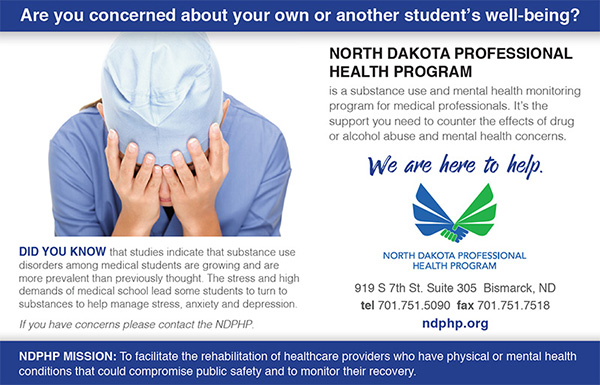 The independence couldn’t have come at a better time, said Ann Leiseth, the NDPHP executive director.

“The NDPHP accepted their first participants in March 2015 and by 2018 we had 26 providers in the program,” Leiseth explained from her office in Bismarck. “Now we have about 50 providers enrolled, so we’ve almost doubled in about 18 months. We’re definitely growing.”

According to Leiseth, the program works like this: participation in the program is voluntary for providers identified as “impaired,” defined by the NDPHP as “the condition of being unable to perform one’s professional duties and responsibilities in a reasonable manner and consistent with professional standards” as a direct result of substance use or mental illness.

Anyone who has concerns about a provider with a mental health or substance use issue, including the provider, can refer her or him to NDPHP. Participation is anonymous, so long as there is no threat to patient safety or a demonstrable violation of the Medical Practice Act.

“Seventy percent of our clients do not come through the Board of Medicine—they seek us out anonymously to get the help they need or are referred,” Leiseth added, noting that the program boasts an 85 percent success rate.

“A lot of physicians think it’s punitive, but it’s not punitive—it’s protecting us and protecting patients,” noted one physician, who wished to remain anonymous, of the program. “It’s a good program. It was a big plus for my recovery.”

Henke said that substance use notwithstanding, NDPHP is attentive to the fact that suicide among physicians had been growing at an alarming rate and is connected to reports that physician “burnout” has been increasing for years—well before COVID-19.

The data on both matters are a tough pill to swallow. One study of medical students and residents published in the Journal of the American Medical Association in 2018 suggested that burnout among those specific cohorts was nearly 50 percent—before providers had even established their own practices. Likewise, a much-cited meta-analysis by Medscape from 2018 stated that “the medical profession consistently hovers near the top of occupations with the highest risk of death by suicide.”

To the tune of 300 to 400 physicians each year, added Henke, or as many as one doctor lost each day.

“One of our passions is helping reduce physician suicide,” she continued. “It’s a problem nationwide, and in a state like North Dakota, where a lot of these providers might be working in small towns, what a huge hit that is for a community. It’s tragic. As providers, we come from the same backgrounds as everyone else. The demons that we live with are very much the same as everyone else.”

The silver lining in all of this, both Leiseth and Henke noted, is that providers do seem to be seeking out the NDPHP, and North Dakota doesn’t seem to be in a worse position than most other states on these issues.

“Were pretty even with the rest of country,” Leiseth said, noting that state-by-state comparative data is hard to come by. “We’re lucky in a way in that we’re more rural. With COVID-19, there are a lot more challenges in larger cities like Minneapolis or Los Angeles—they’re seeing a larger trend in that direction [of provider burnout].”

That said, cautioned Henke, North Dakota continues to be a leader in binge drinking and opioid abuse.

“I suspect we’re near the front of the pack with all these other negative factors,” she admitted, repeating that physicians are as likely as non-physicians to get caught in such loops of substance abuse.

“Things seem to be piling on, for everyone,” she said. “When we get a physician or student in our program, we already know their home life and social life are probably shot. Working is the one thing they know how to do in their sleep. But they’re finally here because they’re concerned that their substance use or mental illness is going to start affecting their work.”

Which is when Leiseth and Henke step in to help make things right again.