About half way through a conversation with her department chair, the Graduate Director of UND’s Department of Occupational Therapy (OT), Anne Haskins, was struck by a thought.

“Janet,” she said abruptly, speaking to OT Chair Janet Jedlicka. “I think you’re the only person who has been part of the OT program from start to finish, and at every level.”

“I’d never thought of it that way,” Jedlicka admitted with a laugh. “I hope that doesn’t mean I’m getting old.”

Both Jedlicka and Haskins are fixtures in a department—and School—that has seen a lot of change this century. And both are largely responsible for helping their program, which added the OTD last year, evolve into one of the premier OT programs in the Midwest.

As Jedlicka explained, a few years ago the department had a choice to make: reaccredit the master’s degree by 2022, or use the accreditation deadline as an opportunity to make the transition to a terminal OT degree.

“At the time we made decision to go OTD, the [Accreditation Council for Occupational Therapy Education] declared that by 2027 the point of entry for OT programs needed to be the OTD degree,” said Jedlicka. “We could have reaccredited our master’s program, which was a strong program, but then we would have had to turn right around and start an OTD. So we just decided to move to a doctorate.”

She pointed out that the transition to the OTD has been a true collaboration among faculty at both sites—Grand Forks, N.D., and the OT Program’s sister site in Casper, Wyo. Associate Professor Sarah Nielsen, Ph.D., OTR/L, chaired the curriculum committee, which took the lead in organizing the course structure to ensure accreditation standards were being met. All faculty then took an active role in the team development of course content.

Furthermore, added Haskins, not only is the OTD what the market is demanding—students with an OTD are essentially guaranteed a job right out of college—but the move allowed the team to revise the OT curriculum in a way that is already producing more focused and independent providers for communities across the Midwest.

“In our previous curriculum a student would take a class on pediatrics and then one on OT for seniors, then a kinesiology class, a mental health class,” Haskins explained. “But now we have a subject-centered curriculum. So, a first-year student now learns about foundations of the profession—learning core values and cultural competence—before moving on to a model that focuses on broader concepts like evaluation and intervention for all populations.”

The intended outcome and value of this type of skills-based, subject-centered teaching and learning aligned with a “Eureka” experience Haskins had when she was a clinical provider.

“I remember having an ‘a-ha’ in practice years ago—I was in a stairwell at Heart of America Medical Center in Rugby, N.D., when I literally stopped and said ‘Oh—that’s how it’s all related!’” she recalled. “With the OTD we’re trying to get students to that ‘a-ha’ sooner, so they’re not just thinking ‘I’m with a child now so I only do child OT things.’ We’re showing students that those skills transfer across environments and age, regardless of population or individual.”

In other words, continued Jedlicka, whereas the MOT curriculum was more focused on domain knowledge and content, the OTD is all about critical thinking and clinical reasoning.

“Now, we’re teaching less content, but making students think critically about scenarios and helping them seek out information and generalize treatments about populations,” she said. “We’re teaching the big concepts and giving exemplars of how to apply them to different populations so they can see connections.” 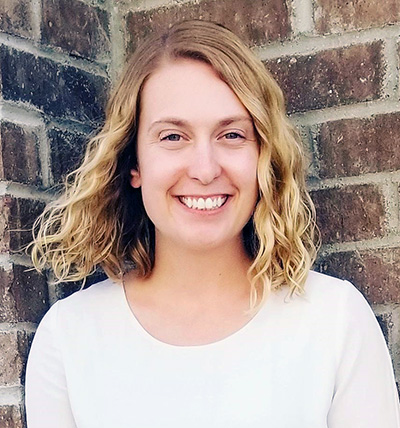 Two of those students are Heather Bowman and Benjamin Germolus.

A Baxter, Minn., native who was admitted to the inaugural OTD class in 2019, Bowman left her job as a medical social worker to go back to school. Although appreciating the need for social workers in the medical environment, Bowman (right) said she found herself drawn to OT for its emphases on client-centered, evidence-based, and holistic care.

“It was important for me to find a career where I could evaluate and intervene within many aspects of a client’s life—the client themselves, their occupations, or their environment,” Bowman wrote from Casper. “I chose UND’s OTD program because of its emphasis on educational professionalism, interdisciplinary collaboration, community engagement, and its use of evidence-based research to inform practice.” 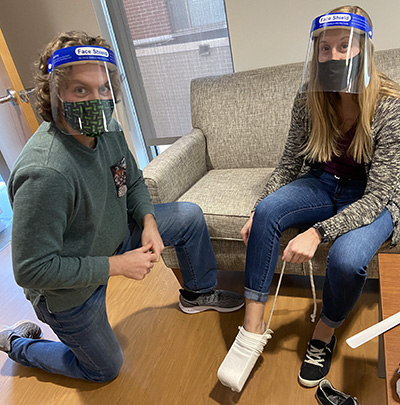 Germolus agreed. Having taken a winding path to an undergraduate degree at the University of Minnesota, the Bismarck native says he discovered OT during a serendipitous summer back in North Dakota.

“I worked as a summer camp counselor at Elks Camp Grassick—a camp for children and adults with disabilities [just south of Dawson, N.D.],” explained Germolus (left in photograph, with Sarah Schumacher on the right), also in his second year of the OTD program. “The camp employs a certified occupational therapy assistant and I stumbled upon an OT session while taking one of my campers to their own session. I was intrigued by the activities she was doing with the children, and the idea of helping others become more independent in the things they need to be able to do.”

Keep them coming back

For her part, Jedlicka said that she’s used to seeing students like Germolus and Bowman spread their wings and take off—only to return to North Dakota.

After all, that was her experience too.

After graduating from Bismarck Century High School in 1978 and UND in 1982, Jedlicka said she was convinced she was never returning to North Dakota.

And now Jedlicka has that same conversation with students.

“I have a running bet with students that I started with one student way back,” she said. “She hated North Dakota—said it was the most boring place and that she was never going to live here.”

“Everyone I’ve made that bet with, I’ve won,” she smiled.

Being a gracious winner, though, Jedlicka said that she’s never collected on all of those free lunches.

Such politesse is exactly the reason so many students are drawn to UND’s Department of Occupational Therapy. A terminal degree in a much-in-demand profession is nice and all, but it’s the grace, wisdom, and kindness of Jedlicka and her outstanding faculty that keep people coming back to the place where they began.