SMHS alum Caleb Skipper, M.D., examines hydroxychloroquine during COVID-19 and ends up learning less about the drug than the politics of science.

That’s the conclusion of a recent clinical trial that explored the efficacy of early hydroxychloroquine use in COVID-19- positive patients.

But even the word “minimal” might be too charitable.

“The good news is that outcomes weren’t worse among those who got a placebo,” explains the paper’s lead author Caleb Skipper, M.D., a 2014 UND School of Medicine & Health Sciences graduate and NIH research fellow who saw his study, “Hydroxychloroquine in Nonhospitalized Adults With Early COVID-19” published in the Annals of Internal Medicine in July 2020. “But the question was if hydroxychloroquine reduced symptoms or disease severity in a statistically significant way, and while the drug was relatively safe, that answer was ‘no.’”

Skipper should know. Having spent years in Uganda and Ethiopia studying health outcomes and infectious diseases like malaria and HIV-AIDS, Skipper has a wealth of experience with the anti-malarial drug that has made a splash in the American news media lately.

For all the bluster about the drug, he says, the science doesn’t lie: the best, randomized clinical trials—on prevention, early treatment and in-hospital treatment—all consistently show that there’s no substantial benefit, if any, to hydroxychloroquine use on COVID-19 patients.

Getting the Science Right

So why do so many people, whether average citizens or political leaders, seem to believe otherwise? The question has the Rugby, N.D., native as perplexed as anyone else dedicated to science. And his answer is that not only is science an imperfect and nuanced process—so is communication.

“One thing you learn about doing any research is that there are limitations, even in well-conducted trials,” Skipper tells North Dakota Medicine. “So, I can’t say that for certain there isn’t possibly some benefit to the use of hydroxychloroquine in some people some of the time. But within the population we studied, that wasn’t the case, which is part of that nuance.”

So particular is science, Skipper continues, that it can be hard for even physicians and researchers to tease out and truly understand the complexities of especially novel pathogens, pharmaceuticals and human biochemistry.

Imagine trying to do so as a non-scientist.

This is why physician-scientists not only should work hard to communicate their work clearly, but should “express some humility knowing that one trial is not the end-all answer,” he says, acknowledging that there are always more trials that could be run and that different people will be coming at not only scientific papers but news reports from very different levels of experience and education.

This is why empathy is also important.

“If you get diagnosed with COVID-19, that’s a scary diagnosis,” says the researcher who was working on HIV-AIDS in Uganda for the University of Minnesota when the pandemic forced him to come home in March 2020. “Most people will do fine, but some people won’t. And we don’t yet know the long-term ramifications. That’s scary.”

And when people are scared, they can think and react in extreme ways, he says, contributing to the misunderstanding of everything from clinical science to the weather.

“So you use different points of communication, let the science speak for itself and educate people on why the science is done this way,” he continues. “It’s best to try to educate people on why a placebo-controlled, randomized clinical trial is held to a higher standard than, say, a retrospective observational study or someone saying, ‘I’ve treated X number of patients with hydroxychloroquine and they got better.’ That’s what we care about: removing bias and trying to do robust, high-quality science.” 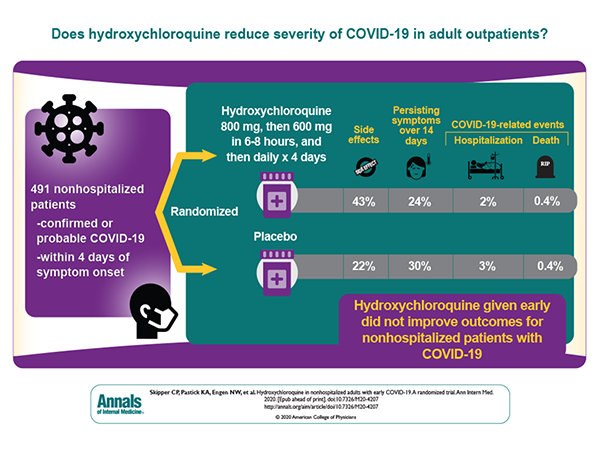 Having empathy and humility isn’t to let those who traffic in misinformation off the hook, however.

“We found a really interesting phenomenon regarding the media narrative where we could track our patient recruitment [figures] over time based on what the headlines were on the various national news outlets,” he goes on, lamenting cable news in particular. “It has been frustrating that there’s been interference with the science through the national media coverage.”

In other words, when some television personalities or politicians talked up hydroxychloroquine, says Skipper, he had no problem recruiting patients for a study of the drug. But recruitment grew more challenging when hydroxychloroquine received negative headlines, most of which were based on incomplete or non-peer-reviewed science.

Even this can have an effect on a study’s outcome, if in subtle or marginal ways, Skipper says.

Then there are the at times nasty messages appearing in his inbox.

“I’ve also received emails telling me, basically, I’m a terrible person [for doing this work], that this is all me working for ‘Big Pharma,’” Skipper laughs, noting that he’s been accused of doing the bidding of the pharmaceutical industry for doing clinical research in the U.S. and in Africa. “And that’s disappointing because I know how hard I worked on this study, to do it right!”

Skipper says he understands why so many people get so passionate about these matters.

“This pandemic is affecting all our lives in sometimes very dramatic ways,” he says. “Because of that, people have a vested interest in information related to it— whether that information is good or not.”

And at the end of the day, Skipper says, people will benefit best if good science can be done in unobstructed ways to find answers.

“If a drug doesn’t work, it doesn’t work. Move on to something else,” he resolves. “Let’s allow good science to help us find something—a treatment or vaccine—as fast as possible.”