In a way, it’s appropriate that Prakash Pathak would end up pursuing medicine.

“Prakash is a Sanskrit term,” the first-year medical student told North Dakota Medicine. “And it essentially means light, or you might say sunlight. And my last name means one who teaches.”

The teacher of light, or shining instructor. This sounds about right for a bright young man who not long ago took the Hippocratic Oath, which all but mandates physicians to teach their art to those who follow.

And Prakash (far-left in banner photo), who is on the process of becoming an American citizen, is today determined to make the most of an opportunity his parents and so many of his countrymen never had.

Because it was almost not so.

Prakash comes from a long line of Nepali language-speaking Bhutanese people, who had immigrated from Nepal to Bhutan over the course of several generations. As tensions rose between the Nepali-speaking immigrants and Bhutanese natives along the border between those nations in the late 20th century, the Kingdom of Bhutan eventually evicted these “Lhotshampa” (or “southerners”), forcibly sending them back to Nepal.

But when Nepal refused the refugees, the Lhotshampa found themselves stateless, and living in camps in southeastern Nepal that were established by the United Nations High Commission on Refugees (UNHCR) in the late 1990s. At their height, these camps housed more than 100,000 Nepali-Bhutanese refugees.

So it is that the first-generation college student and son of Bhutanese immigrants spent the first decade and a half of his life in a United Nations refugee camp in Nepal. 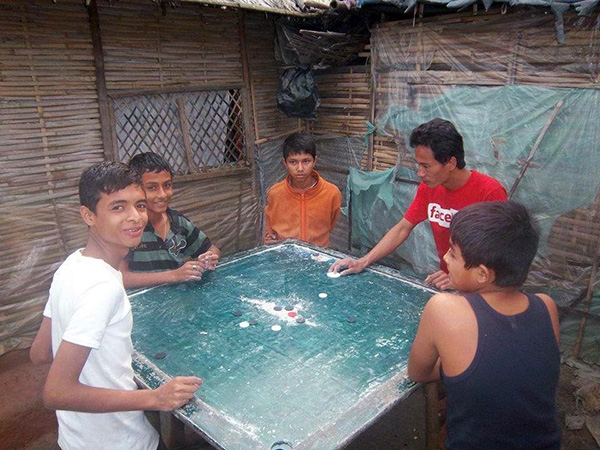 “That’s where my parents and my grandparents settled, and that’s where all of us were born,” explained Prakash, noting that the U.N. and other NGOs provided education for children in the camps.

“We just wanted to go to United States—it didn’t matter where,” laughed Prakash, whose extended family was resettled to Ohio. “We didn’t have much control. So they brought us to Grand Forks.”By 2008, the United States and other Western nations began accepting the refugees, after a long application and vetting process. Prakash and his family applied for resettlement in 2009 and arrived in Grand Forks in 2011, when he was 15.

And he has been here ever since, a proud part of the several hundred-strong Bhutanese community in North Dakota’s third-largest city.

Continuing his education through the English Language Learner program at Red River High School, Prakash, who had already been learning English in the camp, graduated and began to think about college, a decision that weighs heavily on many second-generation immigrants.

“I was the first person to start the four-year college journey,” said Prakash of applying to UND. “My parents’ goal for all of us kids, including me, is to do something better than them. They were born under circumstances where they weren’t able to get education. I was fortunate enough to have education in the refugee camp. So, when I came here, all I needed to do was learn English and get to the normal course of my education. Now I am the first person in the family [to attend college].”

“For me, I think my interest in medicine came from sort of a lack of medicine,” Prakash explained. “I never saw doctors growing up, you know. We would only have seen [a physician] when someone was very sick. For example, when my brother got sick there was a really scary time and there wasn’t a clinic in the camp. They weren’t able to cure or do anything about it. So we had to go outside of the camp to go to a hospital.

“That’s the first time I saw medicine in action,” he continued. “Science is why my brother was cured. When I think back now, that was kind of a point where I started thinking, ‘Oh, I can make people better— cure diseases and do many things.’ That’s when I started thinking about medicine and so when I came here, I pursued it.”

Now Prakash is a medical student at the University of North Dakota. More than this, though, he feels part of the greater North Dakota community.

His work at a local department store and time studying the connection between arsenic and bladder cancer in the UND School of Medicine & Health Sciences pathology lab with Dr. Seema Somji aside, Prakash has been keen on giving back to the community that has given him a second chance.

And sometimes that desire to serve can make things complicated for his family.

Volunteering with campus organizations and the local immigrant integration nonprofit Global Friends Coalition, which helps new Americans and former refugees adapt to life in a new community, Prakash has already traveled to Bismarck to speak to members of the North Dakota Legislative Assembly on immigration issues.

After a bill was brought to the Assembly in 2017 allowing the governor to ban the resettlement of refugees in North Dakota, Prakash and his allies stepped up, helping legislators understand the nuances of immigration issues while the bill was still in committee.

According to Prakash, whose family had already been evicted from two places before coming to the United States, the need to speak up in a formal way was personal.

“I know the experience of growing up in a place where so much is limited— education limited, health care limited,” said Prakash. “I was in a place [in life] where I had to make it possible for somebody else who is in a refugee camp right now, a kid growing up, to succeed. Who might have dreams of one day going to not just the United States, but anywhere in the world. [They should] be able to have the right to amnesty and make something out of themselves. And I still think that’s my responsibility—to make that possible for other kids like me.”

That is to say, for a member of a community that has already been rejected twice on a global stage, it was simply out of the question, thought Prakash, that a third nation—and the United States of America at that—would try to curtail both current and future immigration efforts.

“My parents were like, ‘Don’t go, you’re going to get yourself into trouble’ and things like that,” he recalled. “It was hard for me to make them understand how I looked at the situation, and I still do. I know how it feels [to be rejected].”

In the end, the bill was greatly revised and turned into a study of the economic impact immigrants broadly have on the state (available at: www.legis. nd.gov/files/resource/committee-memorandum/19.9331.03000.pdf). And as it turns out, that impact is net positive.

All of which is why Prakash worked so hard not only to get into medical school, but stick up for immigrants’ rights: to make the community in which his family is living a better and even more prosperous place.

That’s also why he ultimately chose UND over other medical schools.

“I wanted to be close to my family,” he said. “Plus, I serve as a resource for my parents since they don’t speak great English. For me family is very important. I want to be able to help people who wouldn’t easily get access to health care. We have a population that doesn’t have optimal access to health care here in North Dakota, and elsewhere in the United States. So, that’s where I see myself being involved.”