All the Clinic's a Stage “They’re teaching the scales and how to play the instrument,” said Dawn Drake (pictured), standardized patient program coordinator for the UND School of Medicine & Health Sciences (SMHS) Simulation Center, speaking of her standardized patients and explaining how teaching students to take a history and physical (H&P) is a bit like musical composition. “Physicians build on that training and help students make music.”

Standardized patients, or SPs (persons using scripted scenarios who play the role of patients with various symptoms or concerns), have been used for decades as part of how medical students acquire technical and interpersonal skills. These “actors” assist in training students in both the basic H&P and learning how to interact with patients, all of which is taught with physician supervision.

But in medical schools across the country today, including the SMHS, a select group of SPs are being taught by supervising physicians in a more specialized way. These standardized physical exam teaching associates, or SPETAs, serve as instructors who use their own body to teach the basic techniques of the physical exam to medical students.

When employing the SPETA method of instruction, “the patient is a teaching associate who can better assist the clinician-instructor,” explained Rachel Osowski, the standardized patient trainer for the SMHS Simulation Center. “They take the teaching one step further by being in the room with the students, helping them learn the exam maneuvers with the students by helping them practice on the SPETA’s own body.”

From Standardized Patient to SPETA

That is to say, although the primary SP program remains a vital part of Simulation Center training, a series of factors have emerged—including a regional and national physician shortage—that have encouraged the Center to make better use of some of their existing SPs.

One such enhanced SP is Katie Edwards.

“To visualize this, picture [in the traditional model] six med students in an exam room, practicing on a classmate as two physicians rotate between the rooms,” said Edwards, a SPETA who participated in the Sim Center’s 16-student pilot project in January 2020. “We help teach the exam to a smaller group of students. So, in an abdominal exam I can help them push more firmly and see it click in their minds when they understand how and where to push.”

This is incredibly valuable, added Drake, in so far as the SPETA, when they take H&P, “can say to students, ‘you did that really well, but you didn’t look me in the eye very often.’ So they get that feedback from the patient’s perspective right away.”

A registered nurse with a physician husband, Edwards had been working as a standardized patient for the Sim Center for years before being asked to participate in the School’s SPETA trial. Having played both roles at the Simulation Center, the non-teaching SP and the more active SPETA role, and working with patients herself for years, Edwards saw immediately the difference in students’ learning and enthusiasm with the specialized program.

“They get more of the patient perspective and can get the technique down because they’re not just guessing,” she said. “I’m there constantly for the whole thing to answer their questions.”

Second-year med student Erin Eidsness agreed. The Moorhead, Minn., native also participated in the School’s pilot program earlier this year and came away impressed. Stating that she “absolutely loved” her SPETA experience, Eidsness praised her first-year physician preceptors, but admitted that at times there just weren’t enough of them to go around. 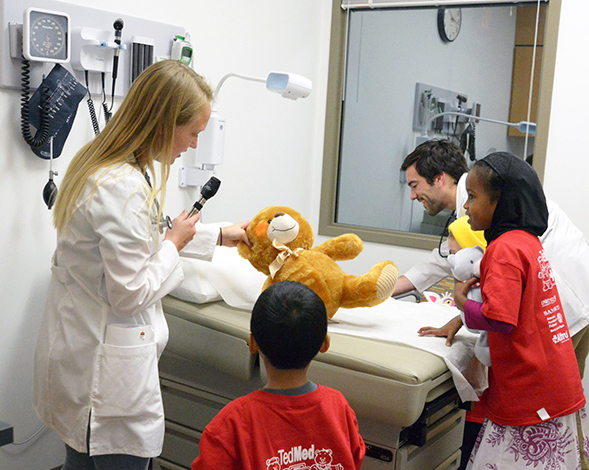 “The main benefit from this program was the low student-to-teacher ratio,” said Eidsness. “There are two students paired with one SPETA which creates a very personalized and intimate learning environment. Normally, when medical students practice on each other we don’t know how the examination is supposed to feel as the patient. [The SPETAs] insight and direct feedback such as, ‘move your hands here’ or ‘you need to palpate more firmly here,’ is critical for improving our examination techniques.”

The data supports Eidsness’ assessment. One 2006 study found that SPETA-trained students performed “significantly better” on their Objective Structured Clinical Exam (OSCE) than those who were being advised by physicians alone. Another earlier study argued that although student H&P performance was comparable between SPETA- and physician-advised students, the equivalent learning meant schools could save tens of thousands of dollars per year by using SPETAs as opposed to physicians as preceptors.

And Osowski is still recruiting for both positions, which make great part-time jobs for college students, retirees, and anyone looking for a bit of extra cash.

“We don’t require SPETAs to have a medical background, but they do need to know some anatomy landmarks, know some medical jargon or the terminology that’s used,” continued Osowski, who came to the SMHS in 2019 and is still looking to hire SPETAs and traditional standardized patients. “We also look for candidates who are physically fit. We need the students to be able to feel the liver, for example, more easily. We’re recruiting for men and women, ages 21-55, as long as they’re in good physical health.” 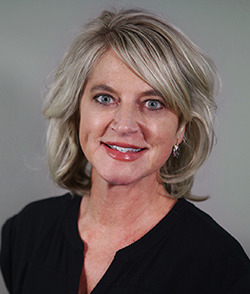 The pitch? SPETAs make $20 an hour and standardized patients start at $15. Not bad at all for a gig that contributes directly to the nation’s health.

“I’ve made it a point since I’ve been here to try to diversify the [patient] pool as much as I can,” said Osowski (pictured). “We’ve been somewhat successful. We’ve found that for persons of some ethnicities or backgrounds—it’s not a job they’re comfortable doing. But we pay competitively, compared to other jobs on campus. And not only is it fun, but the SPs find it a rewarding way to give back.”

Plus it’s a fun job to do, said Edwards.

“The psychiatry cases are the most fun because you do get to really act,” she said with a laugh, referring to her regular role as a traditional SP. “The cases with interviewing and the physical exam are the most real and most engaging. Those are less scripted than other cases, which allows us to improvise some. Being a SPETA is so much more rewarding though. You build rapport with the students so they are comfortable asking questions and really engaging.”

By way of example, Edwards described the session during the SPETA pilot when she saw a student who also had her as a standardized patient in his first year.

“After the exam he said, ‘I just can’t believe you’re the same person.’ Because this student had to interview me as an SP previously and my role was to be someone who was very reserved or shy,” she smiled. “But when I was teaching—as a SPETA—I was totally different. He was shocked.”